Born in Winnipeg, Canada, on the 11th of June 1970, Brad Rubachuk began his pro-career with the Lethbridge Hurricanes of the Canadian Western Hockey League (WHL). Three seasons later, Ruby as he was affectionally known, then joined the American Hockey Leagues (AHL) Rochester Americans for a further three seasons, before splitting the next season between the now defunct International Hockey Leagues (IHL) Fort Wayne Comets, and the AHL’s Binghamton Rangers.

The 1995/96 season saw Rubachuk make the leap across the pond to Europe, where he joined the British First Division (BD1), Swindon Wildcats for a season, before be moved to the Manchester Storm for the inaugural Ice hockey Super League (ISL) season. In little under 3 full seasons with the Storm, Rubachuk, played 196 games and amassed 72 goals and 88 assists for a total of 173 points. This added to the small matter of 508 penalty minutes, shows the determination and quality of Ruby. 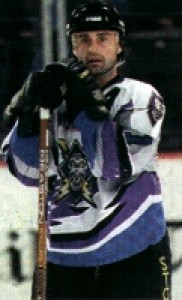 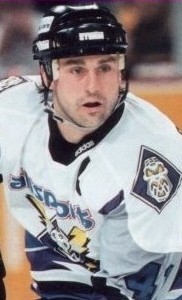 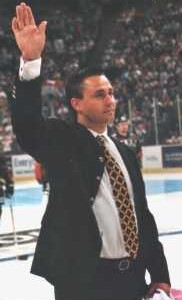 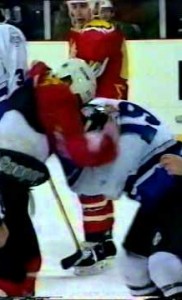 However, this impressive career was tragically cut short when Rubachuk broke his neck whilst playing against the Bracknell Bees in a collison with the Bees’ Paxton Schulte. Luckily, the doctors assured Rubachuk that he would be able lead a normal life, go golfing and skating with his family… but his career as an Ice Hockey superstar had come to an end at the age of just 29-years-old.

We asked life long Storm fan, Simon Harris, to explain what a player like Rubachuk meant to the Storm:

“Brad Rubachuk encapsulated everything that is Manchester Storm. He was the type of player every team craves, he always gave 100% effort on the ice and he always had plenty of time for the fans off the ice. It’s because of this he was loved by everyone at Storm, players and fans alike. He was the kinda player you’d know had his team mates back, never afraid to be in the mix when the rough stuff was being dished out but also there on the score sheet plenty of times too, those kinda players don’t come around to often so the fact his career was cut short through injury is still a sore point with Storm fans. The number 41 was always the jersey you could rely on game in game out and number 41 for Manchester Storm will always belong to Brad Rubachuk”

For more details about the career of Rubachuk, please visit the Elite Prospects website by clicking HERE.